In contrast to the Argentinian portion of Tierra del Fuego, the western or Chilean part of the island is mountainous terrain not much visited save for the flats that border the Straits of Magellan and a wee sliver in the southeast near Usuhaia. This remarkably wild territory with no road access and no human settlement includes the main spine of the Darwin Range, a southern section of the Andes that runs NW-SE for some 130km/80mi with summits at 900m/3000ft or over and Mt Darwin topping out at 2580m/8460ft.

From the highest points of the range, the descent to the west is precipitous. So much so that in about 14km/8mi from the crest, cold ocean water laps at the slanting rocks. These steep western slopes face into strong, often gale force winds and receive copious amount of precipitation and thus it is no wonder that passengers looking northeast from a ship plowing through the ‘inner passage’ marvel, clouds permitting, at spires of exposed rock or slopes covered in snow and ice all between valleys choked by massive glaciers that debouch into the sea.   Conveniently,  in the summer,  elevations abuting the ocean are completely free of ice and some cliffy areas are selected as nesting sites by penguins, cormorants and other sea birds.

Where the slopes of the Darwin Range disapper into the water is not the end of the continental shelf as the latter extends westward in some places for some 60km/37mi before dropping off into the deep ocean blue. This shelf,  bustling with biological activity, is covered with shallow water and dotted  by a maze of islands, all with shorelines, bays and coves.  As expected, the composition of cold-water plants in this area along with fish and numerous invertebrates is similar to that seen near Cape Horn.   And above sea level, the scattered islands may feature fresh-water Sphagnum bogs in open terrain, these sometimes fringed with carnivorous Sundews. Also, where conditions are favorable, forested tracts of southern beeches shade ground-level orchids, ferns, and fungi.

Noting the exceptional nature of this area, much of the Darwin Range was incorporated into the 14,600km2/5,637mi2Alberto de Agostini National Park in 2005. Later, in 1960, Argentina established the  Tierra del Fuego National Park, now 630 km2/243 mi2, which abuts Agostini on the southeast.  A major feature of the Tierra del Fuego park is that it is linked to nearby Ushuaia by a good road that allows visitors to have a close look at the park’s ecosystems. 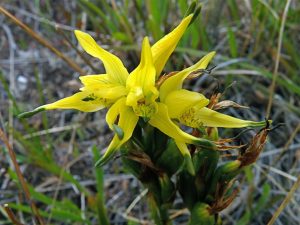 A Dog Orchid– the scientific name is still being worked out.

Stepping out of a vehicle in a parking lot near the large Acigami (Roca) Lake in the Tierra del Fuego park one is surrounded by subantarctic beech forest. This is home to Magellanic Woodpeckers, the males of which are impressively red-headed, as well as a number of small birds including the Tufted Tit Tyrant flycatcher.  Moreover, besides Acigami Lake, the open valley floor is sprinkled with small lakes and ponds, all connected by running streams: the haunt of beautiful Ashy-headed Geese and impressive Upland Geese.  This is also a  hunting ground of the South American Gray Fox,  aptly named by locals the ‘Swimming Fox,’ for indeed the canine readily takes to water.  And at the height of summer, in January, many species of wildflowers appear including  terrestrial orchids, especially creamy or yellow Gavilea species with dark marks on enlarged lower lips. 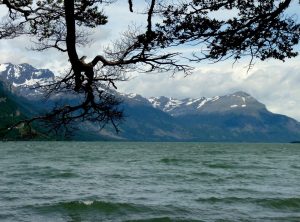 Lake Acigami (Lake Roca) is 11 km long and is partly in Chile and partly in Argentina.

Looking up the side slopes from the valley, one sees that with increasing altitude the hillsides gradually transition from the  forests of the lowlands into open slopes of Andean alpine scrub.  Around the 600m/2000ft altitude level and above,  the landscape features mostly low-growing herbaeous plants, often grasses, and is dotted with small bushes including, among others, Barberry, Gaulteria, and the Chilean firebush (Embothriumin the Proteaceae family). This is a preferred habitat of the guanacos, one of world’s four camel species, that roam here in family parties led by the dominent female. And cruising over this wide-open habitat looking for their next meals are Andean Condors with wing spans of up to  3m/10ft.  A likely favorite feast of the vultures is the remains of a guanaco killed by pumas.

After a number of research studies in areas bordering the Beagle Channel highlighted the special nature of the region, visionaries established the Omora Ethnobotanical Park near Puerto Williams on  Navarino Island.Subsequently, after a five-year effort, the Omora team working with  Chilean government, persuaded UNESCO officials to establish the 49,000km2/18,572 mi2Cape Horn Biosphere Reserve to additionally protect the Tierra del Fuego and Agostini national parks as well as territory as far south as the Cape Horn National Park.

The biosphere reserve concept, now widely implemented around the world, is that the wise use of the natural resources in regions with special biological significance can provide a sanctuary for plants and animals, while also promoting a sustainable living for the resident humans. And currently we see a growing understanding of the fundamental need for a community approach to conservation, one that involves local players at the center with assistance from regional and global multidisciplinary practitioners. Today there are good examples of the  success of this approach.  The Omora Ethnobotanical Park is one.

The working plan of this Omora effort showcases an approach to conservation that promotes environmental research, education, and conservation through  a set of ten interrelated principles involving multiple institutions, actors, and disciplines on local, regional, national, and international scales (see Ten Principles for Biocultural Conservation at the Southern Tip of the Americas: the Approach of the Omora Ethnobotanical Park.  Ecology and Society 13(2):49).

Besides persuading national and international officials to designate this area as a biosphere reserve, the Omora effort has led many other successes. For example, recognizing  the region’s amazing moss and liverwort diversity has led to training bryophyte botanists at the University of Magallanes and to ‘hand-lens tourism’ showcasing the rich diversity of these plants to both local residents and outside visitors.

In addition, a four-year project studying the  Magellanic Woodpecker  has  resulted in positioning this bird as a “flagship” species of the Cape Horn Biosphere Reserve and the bird has now become an emblem of Puerto Williamswith woodpecker images seen throughout the town on posters, clocks, and calendars, among other places.  This big, black bird nests in holes in large, mostly dead, trees and it is now understood that in order to sustain the population,  there is a distinct need to protect old-growth forests where dead trees still exist.  This woodpecker campaign illustrates the usefullness of transferring scientific information into local programs in order to achieve conservation ends.

Overall,  the creation of the Cape Horn Biosphere Reserve in 2005 was a major achievement and human activity in this region is now guided by the concept of three zones: an inner core available for scientific study and educational purposes that is open by permit only, a buffer zone that permits sustainable outdoor recreation including hunting and fishing, and a transistion zone encompassing towns and villages that cater to the needs of the local population. Adhering to these principles, much of the extreme southern tip of South America may well be safe-guarded for the use and enjoyment of many generations into the future.