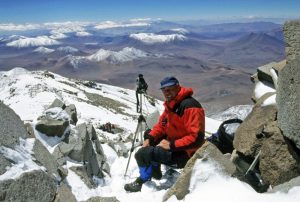 Biography
Born in Illinois, Johan began his undergraduate studies at the University of Arizona, before going on to receive his Ph.D. in Anthropology from the University of Vienna. He conducted anthropological research for more than ten years in Nepal, specializing in culture change, sacred landscape, and shamanism, and also directed Peace Corps Training Projects. Since 1980 he has undertaken historical and archaeological research in Peru, Bolivia, Chile, and Argentina focusing on sacred landscape and high-altitude archaeology.
Recognition for his work has included the Rolex Award, the Golden Puma of the Bolivian Government, the Explorers Medal of the Explorers Club, and being named an Explorer-in- Residence at the National Geographic Society. Museums have been built in three countries to exhibit archeological material recovered during his expeditions, and in 1995 and 1999 Time Magazine selected his finds as among “the world’s ten most important scientific discoveries.”
His research has been featured in several TV documentaries, including National Geographic Explorer, BBC, NOVA, PB and Discovery. He has over seventy publications, including six books. He is currently updating and archiving his Andean and Himalayan research materials.
Publications